They put me in charge of the Nighttime Plan. I didn’t ask for the position, but I had some success with the Evening Directive so the big wigs threw me this bone. And it is quite the bone. A boon of a bone, really. If I can pull off the Nighttime Plan, I might even get to be a part of the Moon Agenda some day.

The Plan isn’t too complex. Basically, during the brightest part of the day over the next several weeks, our people will say to passing strangers, “Great night, tonight…, isn’t it?” If we receive no response, we’ll ignore them, but if anyone contradicts us, like with a “What? It’s noon, asshole” or whatever, we’ll put that person in an industrial trashbag and take them to a facility.

We’ll then surgically fuse ultra-dark sunglasses to their skin and bone (without anesthesia because that shit’s dangerous) and take them back to the same spot on another bright day and say again, “Great night, tonight, isn’t it?” and we’ll see how many will now agree with us now that their entire world is dark.

If any agree, we’ll kill them instantly because they’re lying, and even with shades, you can tell the sun is in the sky. We will not abide liars. But if they continue to disagree, we’ll give them a $10 gift card to Quiznos and praise them on their resiliency.

I’m just happy to be a part of it, really.

I posted a status that was simply, “Animal. Movie. Food. Color. Go.” People commented accordingly. Then I wrote things. Here are those things. END_OF_DOCUMENT_TOKEN_TO_BE_REPLACED

I murdered that man yesterday. I didn’t want to, but he asked me to. You might posit that if he wanted to die, it wasn’t truly murder. That my plunging a knife into his body again and again, hearing the air from his lungs pop through the stab wounds, was just an elaborate form of assisted suicide. Maybe. I had raised the same doubt when the man had asked me the question. Hadn’t he used the wrong verb, I asked. He assured me that he had not.

The man wanted to die. That was for sure. But he didn’t want to die while, well, wanting to die. He explicitly stated that he, “want(ed) to die while yearning for life” if he were to die at all.

The task at hand was to do whatever it took to make the man want to live again, to make him crave each day, to make him fear death as he had when he was younger, healthier, and full of fire. Then, and only then, was I to murder him violently, immediately.

It took me nearly five years to complete the job.

The first step was relatively easy. Upon agreeing to the gig, I kidnapped the man and drugged him heavily. Roofies, sure, but a few other things that put cracks in his memory, doubts in his narrative, and a few hallucinogenic experiences to further confuse him. I kept him about a week, during which time I also went to his house and removed any trace of the disease: doctor’s notes, medical bills, prescription pills.

After that, it was a matter of reconstructing his life and keeping the disease at bay surreptitiously through a combination of drugged meetings with a doctor friend of mine and grinding up the pills into the food he kept at home.

I befriended him under a different name. He had no recollection of our arrangement. I got a job where he worked. I introduced him to the right woman. He fell in love. He got married. We watched the Super Bowl together. I cried real tears into his shoulder when my cat died. He was a good man.

I knew the day to do it had come when he showed me a picture of his newborn and told me he’d never felt so happy and content as he did at that moment. I killed him the following evening.

Do I feel any remorse? No. I respected a dying man’s wish. After I had stabbed him 10 or so times, I pushed him to the ground and climbed on his chest, pinning him with the weight of my body, feeling his hot blood soak through the knees of my jeans, and I looked him square in the eye. I saw nothing but dread, not an ounce of “finally” in there at all.

END_OF_DOCUMENT_TOKEN_TO_BE_REPLACED

Starting to Stretch the Silverstein Idea a Bit 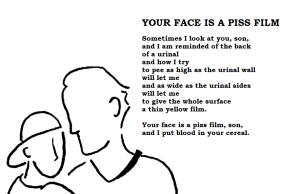 Was thinking about Shel Silverstein a little today, so a wrote a couple kids poems. 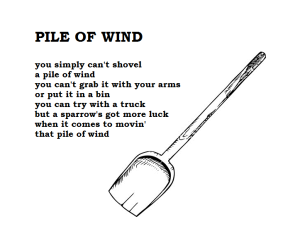 I probably won’t die, but I might.
So in case I do, here’s a box of bags
with stuff in ’em. Good stuff.
The bag marked BAD STUFF notwithstanding.
But those other bags? Gold, Jerry.

Take that small bag marked HAPPY, for starters.
You know what you’ll find it there, kid?
HAPPY.
You’re gonna wanna keep that one.

Pick another bag at random.
Go ahead, I’ve got all day.
Ah, PRAISE, good one.
Well, that’s pretty self-explanatory, right?
You’re smart, kid.
Add that to the PRAISE bag.

That last bag’s marked BAGS
because I had a lot of extra bags.
Maybe you could use ’em
when I’m dead if I die.

commercial for soundproofing
extreme man
yelling at kids
to build huts in the woods
one inside the other
made of wire and wet leaves
one inside the other
entrances pointing
in opposite directions
kid plays a drum kit
at the center
SEE, the man yells
at the Nickelodeon parents,
THAT’S NOT HOW DRUMS SOUND
AT ALL. SOUNDS LIKE OLD DRUMS.

open the cabinet
with all the foods Dad said
were the best
but you haven’t tried them
and he goes,
your mom ends every phone call
with ‘I guess you don’t love me’
she’s a star out of reach
and the dream ends

look out over the balcony
pour poison nectar over the
bad line of people
line of bad people
enemies passing by…
see a person you know
she tastes the nectar
makes a face
wait
you know her and her name
ask your roommate who is her ex if she likes ginger ale
she does like ginger ale
would you like a ginger ale?
she would

cops have questions
check your minivan for clues
they’re not buying the ghost thing
floor of the van
covered in newspapers
see, officer, it’s not me, you say,
my friend wrote this movie, you say,
and you point to an ad
for a movie called
GUYS FIRST
written by Adam Chase and someone else
as if that clears you of bead theft
and the dream ends

later there’s a music video
saldana and deschanel
double zoe
in a music video
for the military
they’re waist deep in mud
with soldiers in fatigues
dancing rapping singing
all wearing the same brand
of grey headphones
marketing, sure
but also a 4th wall break
dismantling the reality
of the music video universe
by showing you
how they keep time
but they’re not in time
and the dream ends